Skip to content
Married Longer Than 75 Years?
We’re On the Hunt – Can You Help Us

We have a quick request. 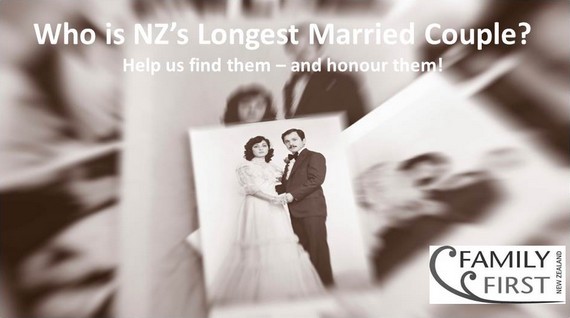 We’ve been inundated with nominations for the longest living married couple in New Zealand with the current benchmark being 76 years.

Nominations will be taken until 15 January 2016 with the winners named on 14 February 2016 (Valentine’s Day) to coincide with National Marriage Week. Winners will be selected solely from nominations submitted. Appropriate gifts – including a family photo shoot – will be presented to them by Family First NZ at a ceremony to be held at the winner’s location during Valentine’s week.

This is an opportunity to promote marriage and honour couples who have done the ‘hard yards’. We want to celebrate with couples who are setting the example for younger married couples just starting out.

Nominations which are open to any married couple (either NZ citizen or NZ resident) may be submitted by email [email protected] or by posting to Family First NZ, P.O.Box 276-133, Manukau City 2241.

The contact information for sending in a nomination simply requires the name of the couple, their wedding date and where they currently reside – plus a contact phone number or email address of the individual nominating the couple.

Thanks for your assistance.