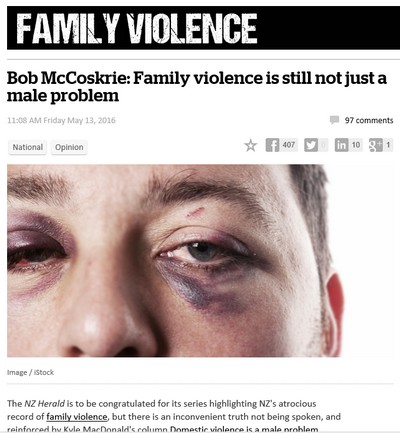 “Family violence is not just a male problem. If we as a nation are really serious about reducing family violence, we need to talk about family violence in all its forms and all its causes. The last time we spoke up about this issue was in 2011 and the political response and condemnation was swift. But we’re more interested in the facts and research and solving the problem than concerns around being politically incorrect.”

There’s been lots of discussion about the 4-part documentary Why Am I? In 1972 the Otago University Medical School embarked on the ultimate nature/nurture test, to study 1037 babies for their entire lives.
In the 2nd episode aired during the week, it specifically dealt with the issue of Family Violence and the role of Gender.
Please watch the episode – and especially the section from 30’42” to 34’14” to see the ‘inconvenient truth’!